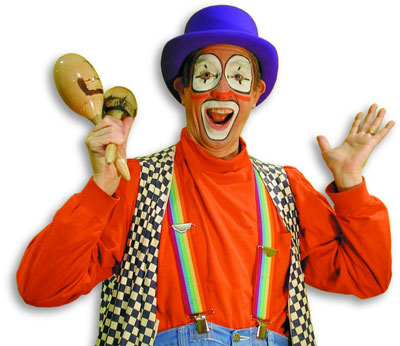 When Cambo was a baby clown he knew he wanted to grow up to be a big clown. And he said so as soon as he could talk. “I want to grow up and be a big clown,” he said. Those were prophetic words, because he’s now a big clown with a BIG show – a REALLY big show. That’s why he calls it The Really Big Show. He also has a big shoe. Two of ‘em, actually.

How’d you get to be a big clown, Cambo, people ask. It wasn’t just eating his clown food that did it. He watched his Saturday morning cartoons, went to funny movies and at different stages connected with his inner ham. A big impact was seeing the Ringling Brothers and Barnum & Bailey Circus when he was just a little tyke, back when the circus set up a huge tent in the field. He saw Emmett Kelley, Otto Greibling and Lou Jacobs back in that golden age of clowns. Another big impact just a few years later was seeing the Moscow Circus with its excellent clown work under the direction of Yuri Belov.

Cambo felt the call of Hollywood, but he knew bigger things were in store for him. Things like birthday parties, hospital visits, city festivals, community celebrations, store openings, family reunions, restaurant family nights, wedding receptions, crowd entertainment for people in long lines, and the list goes on and on.

Anyway, Cambo met a lot of other big clowns along the way. Like at the Ringling Brothers and Barnum & Bailey Clown College from which he Graduated in 1982 (Lou Jacobs taught a bit!) and the International Clown Congress in Philadelphia (1991) and at various workshops including one at Celebration Barn.

As Cambo looks to the future he sees laughter and clown hijinks on the horizon, and that’s one reason he’s glad that he was a little clown with vision – a little clown that became a big one.

Cambo the Clown has received professional development funding through the Kentucky Arts Council, a state agency in the Commerce Cabinet, supported by state tax dollars and federal funding from the National Endowment for the Arts, which believes that a great nation deserves great art.